ARGUS would be attached to an unnamed UAV drone and taken to an altitude around 20,000 feet is able to view 25 square kilometers (10sqmi) area.  For example, if the world’s highest resolution camera was flown to hover above New York City, it could capture half of Manhattan. Attaching two ARGUS could make the US keep an eye on the entire Manhattan 24/7.

This video shows ARGUS in function, you can see how amazing this is.

ARGUS can capture video at 12 fps with an imaging power of 1.8 billion pixels; the world’s highest resolution camera can clearly pick flying birds on the sky. The 1.8 gigapixel powers were made possible via 368 smaller sensors which DARPA/BAE claimed to be just 5 megapixel smartphone camera sensors. The totalities of the 368 sensors were focused on the ground through tetra image-stabilized telescopic lenses. 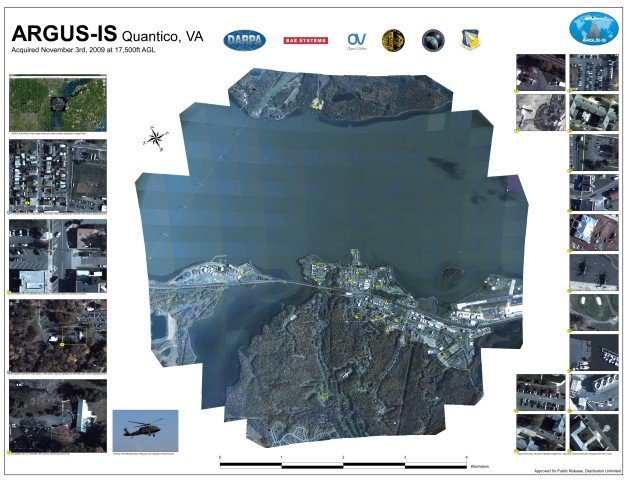 This combination creates 600 gigabytes of data per second, part will be processed, and others stored for later analysis. All ARGUS’ data cannot be sent to the control room; therefore, DARPA has created Persistics, software which is able to identify ground objects and indefinitely tracking them.

The initial intention behind ARGUS, the world’s highest resolution camera was to get it deployed in Afghanistan, but scrapped; the war is winding down before the project could be completed. The best place ARGUS could be used is at home in the US where it will be strapped to a Predator drone for surveillance purposes.

Does this technology amaze you? The world’s highest resolution Camera, 1.8 Gigapixels or 1.8 billion pixels.

Drop me a word in the comment box below!