Have you forgotten to make a presentation video before in your business meeting? Or do you want to quickly create a video of the exciting holiday photos and share it with your friends quickly?

In this post, we are going to discuss how to create a superb video in just a few minutes with FlexClip online video editing tool.

FlexClip is a very easy free video maker for beginners, in which you can create professional-looking videos in just a few seconds, whether it’s a promo video for your business advertorial, a tutorial video for your product, or a lifestyle video – FlexClip online video editor get you covered.

In FlexClip’s video editor, you can cut or split your videos into the desirable clips. To take your video to the next level, you can add background music, edit text, record voiceover, and upload your logo and watermark to your video.

With only a few steps, you can create a far more dynamic video.

It would be much appreciated if you could try out the software and also share it with your friend to them create marketing videos and family stories effortlessly.

FlexClip is a new powerful video maker to develop quality videos for any purpose. Try it out here: https://www.flexclip.com.

FlexClip online video editing tool is a very easy free video maker for beginners, as you and I, for creating professional-looking and high definition videos in just a few seconds. No need to download and install any additional software, you can use FlexClip online video editor directly in your browser online. If you want to make a good-quality video in a very short time, the tool is of great interest to you. Even if you don’t have previous video editing knowledge or experience, you can handle it quickly.

The smartphone is perhaps one of the most heavily used devices in recent years, probably for the fact that you can practically accomplish anything using the phone. You can listen to your favorite songs using music apps, set appointments using calendars, and even record audio. For the latter, we will look into how smartphone recording stacks up with a digital voice recorder.

If you’re into sound recording, you probably know that both smartphones and digital voice recorders can do the job of capturing sounds and storing them in specific file formats for easier storage and distribution. In the case of voice recorders, you need to check which device or model will suit your needs.

A Brief Background on Smartphones for Voice Recording

Did you know that the number of mobile phone users in the world is expected to surpass the five billion mark by 2019? This only shows just how much mobile phones have become extremely significant to a lot of people. The convenience that it brings has transcended to several types of media, and has made its way to audio and voice recording. 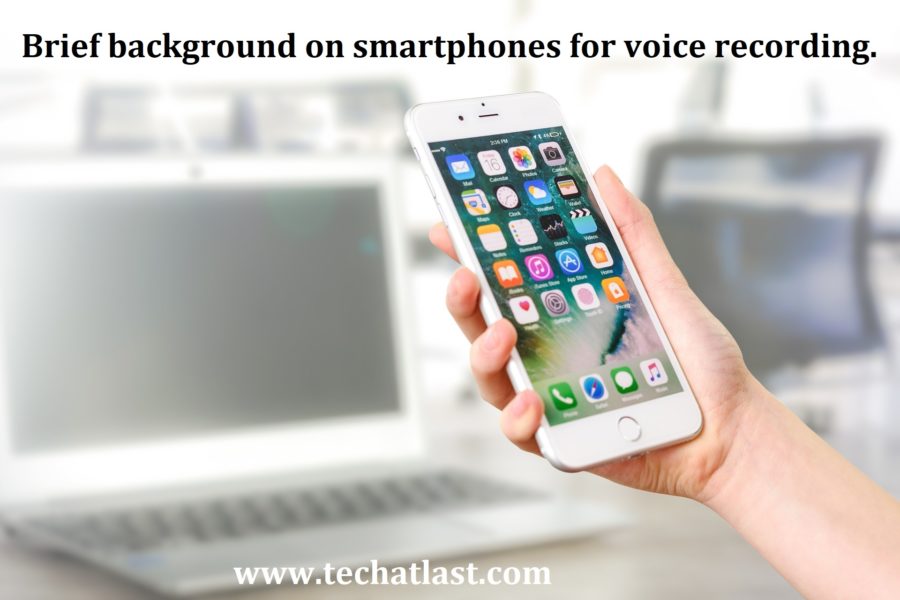 For someone who doesn’t use voice recording as part of their jobs, the built-in sound recorder in most smartphones may already be enough. But what about situations that require high-quality recordings? Can smartphones deliver, or should we opt for digital voice recorders?

What does a digital voice recorder do?

A voice recorder captures sound and converts it into an audio file that can be easily transferred (preferably through a USB cable or any similar accessory) to another device like a laptop or computer. 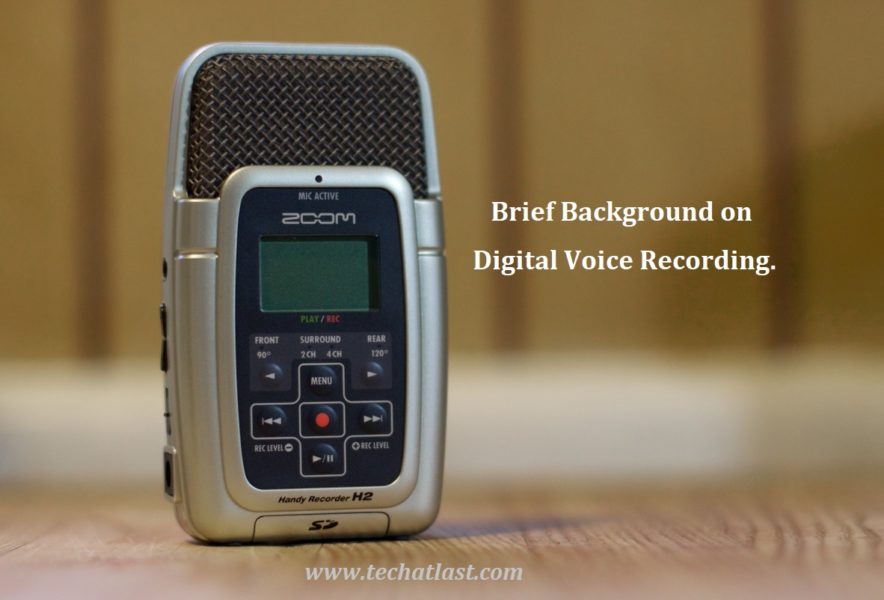 People who have voice recorders may use them for various reasons:

Here are some points that will help you decide on whether to stick to your smartphone or to use a dedicated digital voice recorder.

Although a smartphone enables you to perform several tasks in just a few clicks – including a built-in voice recorder – it has limited recording capabilities compared to a dedicated digital voice recorder.

Some smartphones will only allow you to record short audio files due to a limited internal memory. As for digital voice recorders, depending on the brand, they usually have more storage for audio files.

Sure, some of the latest smartphone models already come with higher storage capacity (reaching even up to 256 GB). However, storing a huge library of sound files may cause the phone to lag and even freeze in some instances. That’s because the smartphone still has to perform other tasks alongside file storage and playback.

Smartphones vary in prices the same way as voice recorders do. It’s difficult to compare smartphones and digital voice recorders in terms of price. Bottom line, more features in a device usually translates to a higher price tag.

Your smartphone may have a battery life of up to 48 hours, the same as some digital voice recorders. However, your phone’s battery power is dependent on how often you use it. On any given day, your smartphone will probably be running a few apps, all of which can drain the battery gradually – and that doesn’t include the actual voice recording yet!

With the digital voice recorder, the battery gets used up only when it is used for recording or playback.

The date for this series has been shifted to last Monday of this month due to unavailability of the person who will handle the show.

All caps raised up to the newly introduced TechAtLast Tech Guide – MR DIY!

You asked for the TechAtLast “MR DIY” live digital issues fixation session; an audio and video screencast sessions, that will reveal what went wrong, where it went wrong, proof that it did went wrong, how it happened, and how to fix them along with a step-by-step write up to complement the process.

Glory be to God, today we are debuting MR DIY, or simply put “Mr. Do It Yourself”. Your host is your very own, Olawale Daniel, and he’ll be supported by Tomiwa Awoyera in the technical department (one of our intern). Not only that, we will be launching our official TechAtLast media podcast channel towards the end of December, 2014.

That means, starting from January, you’ll be airing us live via the new and first ever TechAtLast media podcast channel; we’ll be featuring experts interviews, news, reports, and major fixes to common tech glitches (with reverence to resources from our Mr. DIY series), along with complementary weekend review of what’s going on all across Africa and the rest of the world in the digital world.

The podcast session is going to be rendered in three different digital format; video, audio and text. We want to make it more compelling, informative, and user-friendly (with ease of access to every readers). It is because you’re in our mind when the idea was conceived, and we will make sure that you will be the cornerstone of its success story. This is why we present different format for your enjoyment.

The first episode will start first week of January and subsequent ones will follow after, airing every Monday of the week. This is part of TechAtLast transitioning into a world-class technology contents service provider, offering fixes to all your tech trouble and challenges with our in-house editorial team ready to help, every Monday of the week.

Stay subscribed to be the first to know when we release the first edition of “Mr DIY”!

BREAKDOWN OF EACH SHOWS

Mr. DIY is a user or reader-defined two-ways information dissemination program. All our users are encouraged to submit particular questions that they needed an answer to through our submission page (more information about this soon). Our technical team will manually select questions to be treated by our anchor every week. All answers will be published every Monday through our official Youtube channel (more on that soon) and embedded here on TechAtLast with links.

Our focal points are: Videos Tutorials, Tips and Tricks, How Tos, Fixes, major fixes to common tech glitches and everything-technical.

On this video, audio and text podcast, we’ll be featuring interviews from expert in the tech ecosystem, trending news, custom reports and analysis coupled with futuristic inventions, hangout and news.

Podcast Host: Your host will be Olukunle Moses, the editor-in-chief for TechAtLast News portal, and he will be supported by host of other TechAtLast members to be announced any moment soon.

NB: We have great plans in the pipeline to introduce two new powerful features to TechAtLast, but they are still in the ideation stage. We’ll keep you posted as they unfold.

The Internet of Things is evolving and only few folks observe that it has existed for decades. Room5 is one among the frontline firms that have been operating and strongly believed in the Internet of Things idea since its inception. As IoT expert, Room5 is a trustworthy and reliable source for information in this aspect and will be sharing their knowledge with you during a free webinar that will be taking place this October; the 21 and the 23rd respectively (read on to know more).

Everyone is talking about the Internet of Things. In my own opinion, not everyone has an idea of what they could be getting from having a profound knowledge of how it works and what they could be benefiting from availing the opportunity. From the market perspective to how it will impact users’ lives, there’s already a strong trend going in the IoT industry. Getting a useful, helpful, yet practical advice with guidelines for building smart, connected products seems to be the challenge for almost everyone trying to create stuffs for the internet. From starting the project, to choosing the right infrastructure and framing it to work as envisioned, and delivering such a wonderful product to the end users, with your praises on their lips even after they might have paid you awesomely for the product, should be your next focus.

In making this happen, there’s going to be a webinar featuring top industry experts with hands-on knowledge on how to make your Internet of Things project a BOOM-like experience!

Wondering how you can get a hold-me-by-the-hand kind of information that will yields good results?

Think less of that! You will get more than that.

Why building a smart and connected solutions?

Smart, connected solutions is the next rave because people nowadays prefers to do less while getting more done within a shortest possible time, and what they need in such a scenario is smart and connected systems of computers; simplifying the whole process, taking away the risk of outages and irregularities.

For one to be able to effectively create a solution in this field, the fellow need to have at least the underlisted technical disciplines, that were not previously in high demand, such as;

For you to be a success in this field, a strong approach that takes emerging challenges and winning stratagems into consideration is highly needed.

Room5 is a leading firm in the aspect of building smart, connected products for the IoTs with their engineers building real and existing products for some of existing customers such Intel, BMW, Sony Ericsson, and Samsung on regular basis.

Have you been thinking of knowing some of the best practices in use for building smart and connected devices?

You are covered because in this 30-minute technically-inclined online call, Eric Ljung, the Room5’s senior development director, will be taking you through some of these processes. At least, after the program, you will be armed with valid details about the complexities and challenges that you may likely come across when building smart, connected products and how to deal with them.

About the Internet of Things webinar host; Eric Ljung

Eric has been in the fold for a long time; with 20 years of experience in virtually all the technologies that summed up the Internet of Things, you can bet on the kind of knowledge you will be taking home.

To be partaker of the call, register for this free webinar.

Waiting to see you there.