Gun design was revolutionized during the 1800s, pushed by a desire for more accurate and rapid shooting. Bullets changed most dramatically, evolving from the round balls used in muskets to the familiar cone shape that made rifles the weapon of choice for hunters and militaries around the world.

The Bayonet, Not Bullets, Made Muskets Effective 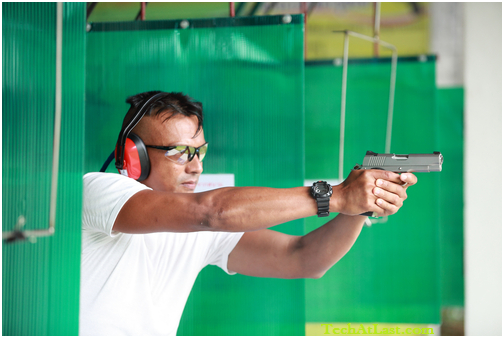 Early guns were mostly muskets and rifles that worked through flintlocks that created sparks to fire off gunpowder and propel a lead round ball out the chamber. Both were single-shot weapons.

Muskets were used in battles because they could be loaded more quickly than rifles. They weren’t terribly accurate, particularly over distances. Their chambers lacked spiral grooves that had distinguished rifles since the 1600s to improve shooting accuracy. But muskets had a dual purpose:

Writing in the Journal of the American Revolution, Hugh T. Harrington notes that muskets also lacked a rear sight, making aiming mostly guesswork. It was also difficult to accurately load gunpowder under active fire, so barrels were often damaged as well.

Rifles, on the other hand, shot with much more accuracy. However, they took a lot more time to load. Most experts say a musket could fire three to five rounds per minute, while a rifleman or sharpshooter could get off one shot every three minutes. Only sharpshooters used rifles in battle.

Bullet cartridges were introduced in the 1840s for pistols. They kept explosive primer, propellant, and bullets in one place and ended the tiresome loading cycle. Now, a hammer strike to the casing activated the shot. Daniel Wesson (of Smith & Wesson fame) strengthened cartridges in the 1850s so that they could be put on rifles as well.

The development of center-fire cartridges, which moved primer to the center of the cartridge, changed how weapons fire altogether. Manufacturers recalibrated hammers to precisely strike percussion caps that held the primer in place. Striking pins or spring loads ignited the primer and powder to fire the bullet. This remains the basic firing mechanism in modern guns, except that bullets are now encased in jackets they shed as they exit the chamber.

Since rifles shot more accurately, it’s not surprising they were the focus for better ammunition and design upgrades.

The most significant changes in ammunition came from France, where an army officer created the Minie, the first cone-shaped bullet, in the 1850s. Minies were also made from lead, but their shape helped them spin out the chamber at higher speeds, making it a more powerful weapon. Muskets fell by the wayside.

During the Civil War, both sides used Minies in their rifles. Later in the century, manufacturers created special bullets with points that penetrated further into a target. Hollow-tipped bullets expanded on impact, causing maximum organ damage on targets. The 1899 Hague Convention outlawed these bullets, but the U.S, did not sign off on it.

Lead bullets didn’t hold up well to the increased temperature and velocity of larger firearms and repeating rifles that fired multiple shots before reloading. Their outer layers stripped off, fouling the barrels. The solution was to create metal jackets to preserve the bullets during the firing sequence.

Copper and zinc alloys, are used in most pistol jackets today. Larger bullets for rifles and machine guns are coated in steel or cupronickel (also called copper-nickel). Bullets used in modern warfare are entirely cased in jackets (full-metal jackets), although Military Times reported in July 2015 that the Army plans to create a new pistol that will fire hollow-tipped ammunition.