Today, we’ll be reviewing the ExpressVPN Linksys WRT1200AC. This product comes from a collaboration between the two companies, and offers a high-performing Linksys router with military-grade VPN encryption.

Pros and Cons of the ExpressVPN Linksys WRT1200AC

Let’s take a look at the specs of the Linksys WRT1200AC, from the official Linksys product page: 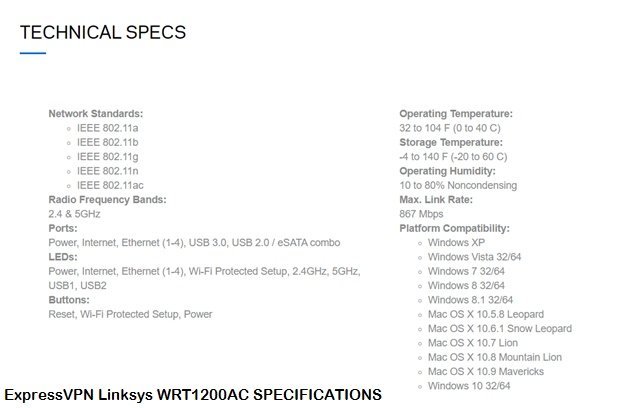 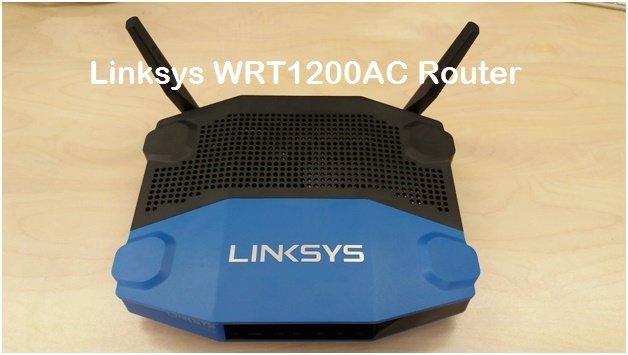 The Linksys WRT1200AC features a black and blue casing and sports two antennae that are screwed on at the back. A spacious front panel facilitates easy reading of the router’s usage. Overall, the 1200 is quite sturdy, stacks nicely with other Linksys products from the same series, and has plenty of ventilation holes to ensure the router remains cool during peak performance.

All of the ports and switches for the 1200 come at the back of the router. These include: one eSATA/USB 2.0 connector, one USB 3.0 port, a power connector, a reset button, a switch, and four Gigabit Ethernet ports. While the many ports available may intimidate less tech-savvy users, you only need to plug in the power cable and an internet cable to use the router.

In our experience, setting up was very straightforward. We plugged in the router, followed ExpressVPN’s setup guides, and were online within 10 minutes.

In our tests, the 1200 operated very smoothly. It showing plenty of processing power and memory even when running a processor-intensive protocol like OpenVPN, with no noticeable loss of speed.

Using the stock hardware, we noticed the Wi-Fi range is adequate for most residential homes. However, users looking for even wider coverage can replace the stock antennae with higher-end offerings.

The performance of ExpressVPN’s tailor-made VPN app for routers was equally impressive. With the ExpressVPN firmware installed in the router, we went over to www.expressvpnrouter.com and connected to a number of ExpressVPN’s 130+ server locations with no issues.

ExpressVPN offers unlimited server switches, so if your media diet includes a healthy dose of Fox Sports Australia and American Netflix, just switch to a new IP by connecting to a different VPN location, and you’re done!

One of the highlights of the ExpressVPN router app is a nifty feature called “split tunneling.” This lets you turn VPN protection on or off for each of your connected devices. While you might want to save time and connect everything to the VPN, split tunneling is great because it lets you keep VPN protection on devices like your laptop and phone while keeping access to local network devices like your network printer.

Our Verdict on the ExpressVPN Linksys WRT1200AC:

In a word, we think the ExpressVPN Linksys WRT1200AC is a great package. The router from Linksys and the app from ExpressVPN are a joy to use, guards against common issues like DNS leaks, and runs smoothly at all times.

For users looking for a top quality router with industry-leading VPN protection, we highly recommend the ExpressVPN Linksys WRT1200AC.

But don’t just take our word for it! Check out ExpressVPN’s own humorous take on why you should consider a product like the ExpressVPN WRT1200AC!

Whenever you sign up with a new Internet Service Provider (ISP), you normally get a free broadband router included in the package. More generous companies may even send you a new router every now and then to replace the outdated model. Many home users automatically assume that they must use the free router provided and some even assume that it is impossible to use their own broadband router. The situation can be complicated, but it is most likely that you have more options than you might think.

For most home users, using the router provided by the ISP is recommended. A free router is not likely to be as high-quality or as feature-rich as a third-party one manufactured by a well-known and reputable company, but it normally provides everything that the average user needs. In some cases, ISPs may even attempt to prevent you from using hardware which is not provided by them. If you are thinking about using your own router, you should first check with your ISP to see if they allow it. Some ISPs will temporarily suspend your service if you attempt to use your own router.

Another issue is technical support. If you are a novice user, you should always stick to the free router provided. Using another device, you will need to adjust your own network settings and set it up using the software and manual provided with that device. Your ISP will not be able to offer you any technical support for hardware other than that which it provides. 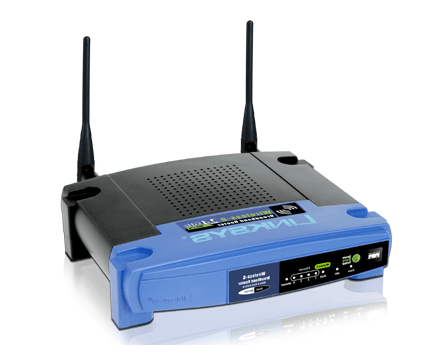 If you insist on using a different router, you should always keep the free one as a backup just in case anything goes wrong. Also, if you need to call your ISP for technical support, you’ll most likely need to be using the router that they provided before they will help you.

Using Your Own Router

If you choose to use your own broadband router, you can generally enjoy the use of more features, improved performance and a better wireless signal. The current wireless standard is 802.11n and while most ISPs will provide routers using the latest specifications, others may be out of date. Using your own router ensures that you have the latest hardware available.

ISP-provided routers are often very short on features as well. Some of them have particularly limited connectivity options. If you have a fairly large wired home network, you may find, for example, that the free router doesn’t provided enough ports to connect all of the computers.

If you choose your own broadband router, you can enjoy extra security, performance and connectivity features as well as things like built-in multimedia streaming features and print servers. For power users, using your own router is definitely preferable.

Finally, if you use your own broadband router, you will need to retrieve the configuration details from your service provider so that you can get it working correctly with your connection.

When you opt for a new Internet service provider, it is normal for all of the required hardware and software to be provided for you including setup information and technical support. For most users, this is simply much easier than attempting to configure a router yourself from scratch. Unfortunately, however, the quality of a free router provided by the ISP is unlikely to be able to compete with that of a high-end third-party solution. Since this is the case, more advanced users with higher requirements will probably want to use their own hardware.

In some cases, the ISP may offer various alternatives when it comes to the broadband router, so it’s worth looking there first. If your ISP provides a choice of more advanced broadband routers, they probably come preconfigured for your connection too. Also, you won’t need to worry about a lack of technical support if you encounter a problem with the hardware.

Also worth noting is that business broadband packages often come with better quality and more feature-rich hardware, especially with regards to security and reliability. By contrast, your average free broadband router provided with a standard home Internet service is rarely anything to write home about.