Its been awhile that I have posted hilarious content. If I recollect, I think the last funny article I wrote was two years ago about funny technology images. I know you guys must have missed this type of belly-aching, and mind-blowing contents lately – I promise, you won’t have to miss much from us again.

This time, I’m back with something different. In fact, it is techily-funny! You better mind my use of English 😉 🙂 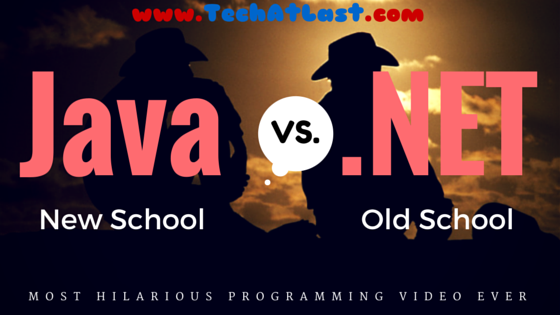 It is a story of a young boy who find happiness in playing with Java programming language, but finds himself alienated in an inhabitable .NET environment that comprises of his family members. Every member of the family share similar point of views except this Java-crazy boy. He loves exploring Java programming language because, he thinks it is “beautiful and has a robust, secure, portable and scalable features” unlike what he could get from____________ (fill in the gap).

It is time to tell the truth about who you really are, boy! Are you with us or against us?

On a fateful Christmas day, he couldn’t keep it to himself any longer, I guess it is time to reveal the truth about who he really is. Here’s how the conversation goes:

Boy: Dad, Mom, I have a confession to make. I’m using !
Father: I don’t know what the hell you’re talking about?
Boy: I want to use a programming language which doesn’t “only” run on Windows.
Father: That’s just wrong!
Boy: As you already know, “Portability has never been a priority for Microsoft.”
Mother: My son is a monster!!!
Father: Microsoft gives us .NET based applications that share information with other applications via web browsers. They actually enable us to send XML-messages through SOAP! Through SOAP!
Boy: Shouldn’t you be able to make your own choices according to what you need?

GBAMMMMM!!!! This boy deserves a bottle of beer or a power-packed slap!

He is most concerned about Microsoft’s monopolization of his rights to code as he likes; he believes everyone should be able to make their choices, especially when it comes to programming language selection.

To add salt to the wound, while the boy was trying to leave the house with fury, his Father tried to force him back and mistakenly, the boy’s shirt got ripped apart. Shockingly, spotted on his wrist is a tattoo image that symbolizes “I love JAVA.”

Immediately the Dad saw the tattoo, he collapsed and died!

I don’t know why someone would be so religious about programming language like this when Bill Gates, the founder of Microsoft, himself is not! Or is he? 😉 I don’t think so.

Meanwhile, while paying his last due, the boy had a conviction that Microsoft Inc., may be right in setting the standards for .net, which definitely makes it better than Java. Meanwhile, it was too late for him to bring back his father from the dead.

I guess the boy might be right. But I will leave you to decide that.

Watch this epic video to know more. The Java vs .NET war story is just getting started, keep watching and sharing, and learning more about Java and .Net programming languages.