Foursquare is a location-based mobile social networking website, the website and its application pretty works with Smartphone and tablets on different platforms. As a user, you will be able to check-in at venues using your app, text messaging or the mobile website.

Currently, Foursquare has over 50 million community members worldwide with more than 6 billion check-ins so far, millions of it recorded on daily basis. The merchant platform has over 1.7 million subscribers.

Foursquare already has all the powerful tools local and offline businesses need to keep and attract more customers.

How to use Foursquare for marketing

Be visible on Foursquare 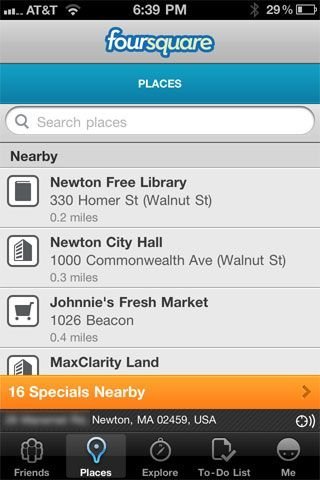 Foursquare has much more become a business directory, the first step you need to take if you will like to attract prospective client and customers on Foursquare is to become visible. A user may have previously added your business location the moment ago when he checked in, but you will have to create the business information so that people will start finding you. Simply search for your business and if you can’t find it, add it yourself and enter your category and sub-category to give your business a refined definition. You can verify your business location with foursquare by phone or email.

Utilize the Foursquare specials and promotions regularly to boom your business

Foursquare is loaded with a feature called “specials and promotions.” Create a promotional offer and deals in your business and broadcast it on Foursquare for users to see. If you run a boutique, you can create a special discount group promotion for families, freebies etc. Consider rewarding loyal customers using the Foursquare specials.

Reward customers who give tips and feedback

Foursquare has a feature whereby customers who have visited your business can comment, suggest, give tips and feedback. If you will want to get the best out of Foursquare, you need to be active, keep track on what users are talking about your business. Positive reviews and feedback from customers automatically go public, work out some innovative ways to reward such customers and act on given tips.

One of the ways to keep your customers is by sending them updates regularly; this new Foursquare feature gives you an advantage to quickly announce your new offer, latest promotions, just arriving stocks and special deals that your business has just started to offer. You can upload images with a short review in the update.

Stick a Foursquare check-in sign at your business’ physical location so that users can easily follow your business on the mobile social networking platform.

Are you taking advantage of Foursquare marketing opportunities yet? Let us know what you think.

Foursquare has user base of over 20 million users and if you are also one of the esteemed users of this location-based social networking website, then here is something important for you. It was in the news that Foursquare is working on updating its Privacy Policy. Foursquare has sent an email to all of its users regarding the change in its Privacy Policy, that will be in live action from 28 January on wards.

According to the company, this update in its privacy policy is to bring a change in the way it displays its users’ names. The new Foursquare privacy policy is focused at making users’ names less confusing, that will allow  business setups to see more users, who checked in at their venues. A new document named ‘Privacy 101′ is also published for explanation in new Foursquare Privacy Policy.

Till date, Foursquare has been displaying its users’ names as ‘First Name+ initial of Last Name’. For example if your name is ‘Abhinav Arora’, it would get displayed as ‘Abhinav A.’ Though the full name gets displayed in search results, but with the new Foursquare Privacy Policy, the full name of users’ on the platform will be accessible across the site. This new Foursquare Privacy Policy and hence full users’ name display feature will be live from 28 January, 2013. Almost a month to go for it.

A special email has been sent to each user making them aware from new Foursquare Privacy Policy’. The email sent by the company reads:

As you might know, you can see other users’ name while checking-in at any particular venture. If you are one of them, who may not be comfortable with this feature in new Foursquare Privacy Policy, and want to be anonymous, then you can do so by going to Foursquare’s Settings page where you can change your Full Name.

Both these changes in Foursquare Privacy Policy that are going to be into effect from January 28, 2013, are good for businesspersons. They will be able to see the full names of users who check-in at their venture. The more user view capability will also land up as positive results for business owners.

The concept of publishing ‘Privacy 101’ regarding new Foursquare Privacy Policy is very admirable as Instagram is facing hard times and downtrend in its daily users because of ‘confusion’ caused by ‘Language’ used in its new privacy policy’s announcement. Foursquare does not want to face the same issue, that’s why keeping it simple. Good Move!

The US president, Barrack Obama in his bid to win the second term election, has made another great steps in achieving his second-term presidential aim by joining the fastest growing social networking site, Foursquare. He made this move in order to make it easier for him to have access to relate with large amount of people more better than he has been doing it before so that he would have covered much ground before the election by next year 2012.

About 2 months ago, President Obama re-opened his Twitter account when he finally said clearly that he will starts to tweet from his @BarrackObama twitter account in order to reach out to his followers and mostly everyone in the states and abroad.
According to this infographic, Foursquare achieved ten million users as at last month (July 15th) and the chance of getting bigger within a couple of months is very certain and Mr President knows very well the power of social media because it is part of his campaign when he was trying to contest for the presidency position back then in 2006/2007.

Obama joining Foursquare comes just hours after the geosocial network unveiled Tip Lists, a feature that lets users and brands bundle and curate their best tips into easy-to-follow lists. It seems that the White House will be using Tip Lists as a way to track the President’s visits across the country as he begins his campaign for reelection. <Mashable>

With this news, everybody now can have access to relate with the president on Foursquare and also on twitter @BarrackObama.

Foursquare is a social site just like facebook, twitter and Google+, it is a site that allow its users to share and connect with their friends and families without stress. With foursquare, you can share things with anybody that is your friend on the platform without stress. It is a promising social networking site.