The social networking giant Facebook is glowing in the news all over the web because of new changes becoming part of it. Well, as you know, Facebook is the no.1 social networking website and has more than 800 million active users. There always had been privacy related issues with Facebook. A long back, the users complained that Facebook is selling their personal info to the advertisers to fill its own pocket. If you are an active user of this social networking giant, then you might have noted the new ‘Privacy’ button that just became part of Facebook. This button locates at the top right side of your Facebook profile page, and has ‘Lock’ as its icon.

This new button enables you to go through your privacy settings with ease. While the Facebook always keep facing the privacy related blames from its esteemed users, still it is rolling out an update that will let any stranger to inbox you for $1 only.

As you know, if by going through your privacy settings, you can make sure that no stranger, whom you personally don’t know, disturb you by sending friend request, commenting on your posts, or by sending you message. But the ‘Message’ part will no longer be in your control as any stranger can send you message by paying $1 only. It does not matter what your privacy settings are, any stranger will come, will pay $1 to Facebook, and the person will be allowed to message you – this is embarrassing!

“This test on our service will offer a small percentage of people the feature to pay in order to have a message delivered to the Inbox of the recipient rather than the Other folder that the recipient is connected with.”

Writing in its blog post, Facebook give some examples to make the users understand the benefit of this new feature. According to Facebook, this feature is extremely useful in the case, if you’re going to send a message to person whom you are not friend with, and heard the same in any event. Also, if you want to contact any person about a job opportunity, but are not connected with him/her at the social network, then this feature will enable you to reach your message to that person’s inbox. The receiver will also get benefit from the feature, as they’ll be able to hear from all those people, who have an important message to send them.

This new feature is yet in the ‘Test Mode’ and is getting tested with the people living in U.S. The no. of messages that will get routed from the ‘Other’ folder to ‘Inbox’ folder will be restricted (limited) to maximum of one message per week. Facebook also says that it is working to make the Inbox stringent by introducing the new filters. The Facebook “Basic and Strict filters” feature enable the users to decide whether the emails coming to their @Facebook email ID, will be visible in ‘Inbox’ folder or ‘Other’ folder. 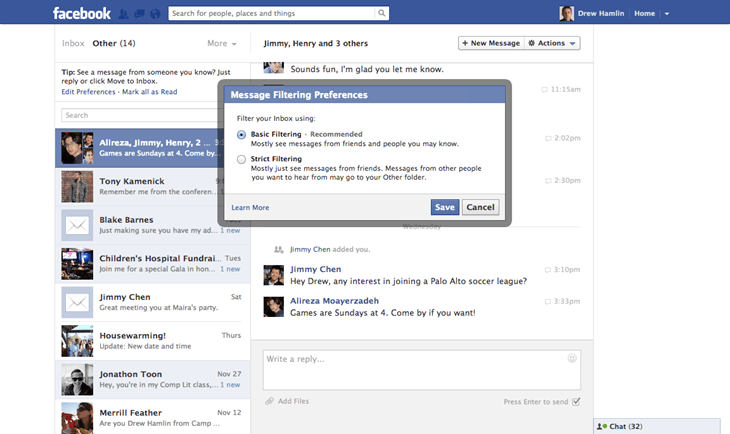 As the feature is in the ‘Test’ mode as of now; it will take some time to roll this feature for every Facebook user. What is going to be impact of this feature on the immense popularity of social networking giant? Are you pleased by this new upcoming feature or are very much concerned about your privacy, while working on Facebook? We are curious to hear from you on this. Use the comment box below to share your views.