Have you heard of the story that went viral few days ago about a Father who shot his daughter’s laptop because of her Facebook rant? If no, you are missing! There are a lot to read from this story of the 2012 “acclaimed father of the year” by the name, Tommy Jordan.

Though, this post came late as a sign of my absence from the internet for the past few days. During my vacation, I only visited Techatlast to check the statistic and some others things like editing guest contributions, social media marketing and the likes.

How did the whole story goes?

You needn’t to ask because I’m ready to share all of it with you!

Mr. Tommy Jordan and her daughter name Henna, happened to be on the toughest side of their lives. The daughter always complained about her parents behaviour towards her. And along the line, she didn’t keep those information away from her friends on Facebook, a popular social networking site, which many has pointed out to be the starting point of majority of family related issues on file, she prefers to go public about minor issue meant to be resolved in the home.

The girl’s action caused a stir in the family. The girl wrote line of texts about her parents handling of her and how she feels about it, unknown to her that the information is at Tommy’s disposal.

Tommy Jordan read a post of Henna’s facebook profile on that fateful day where the daughter was reporting her ordeal and experience at home, to her friends. She said specifically that she doesn’t like how her father is treating her, that both parents were unfair to her and she is very sad about it.

After reading the post, the father got furious and took the step to put an end to the menace on ground, which eventually makes the whole incident a viral content candidate for the week. Since the girl was using a laptop to do all of those activities on Facebook, shooting the laptop would keep her mouth shut and make her face the reality of life, I guess that was what came to Tommy’s mind.

But, as this story turns out to be more interesting for some people who believes in following all parenting rules and regulations, some group of people doesn’t share the same view with what Tommy Jordan did to her daughter’s laptop computer, which is why the video went viral. It goes beyond our imagination, topping the top of the day news across the world from different media sources including CNN, BBC, etc.

Tommy who lives in North Carolina was very angry and he wants the world to know he is, and that is why he took his camcorder and the girl’s laptop out, along with his gun to shoot it. But, he was just a person who I hope you can learn positively from – the art of keeping record of events. He did not let that process go that way, he captured it down for reference and uploaded it to YouTube for people to watch. 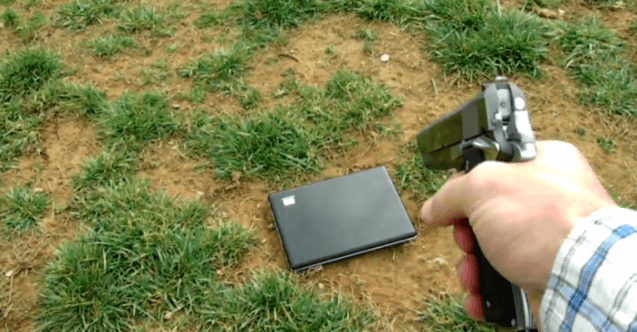 In the video, Tommy read the whole message that the daughter wrote in her post aloud. And after that, he took out the gun and shot Henna’s laptop with a hollow hole in the laptop.

He later uploaded the video to his Youtube and Facebook account, and since then, the video went viral with many people viewing it from all part of the world. You can as well check the video out.

So, if you are the father like this, what would be your action? What Jordan did, is it good or bad as a good parent in the house? Let us here all you’ve got to say in the comment section below.