TELUS, a national telecommunications company situated in Canada, serving people in many telecommunication products areas ranging from providing voice and internet access, entertainment and many more has decided to launch the BlackBerry Curve 9300 in Canada on April 2, 2012.

The blackberry curve 9300 is going to be offered with the company’s prepaid service and for people to get it, they would have to pay $199.99 out-rightly along with a $20 for activating the credit. In case you want to read more about this device features, please read them below. 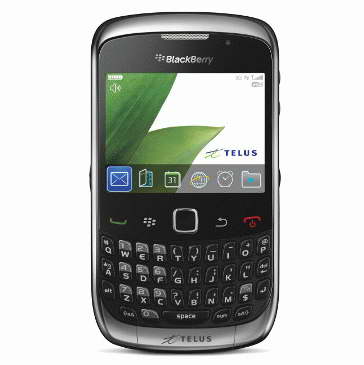 When we’re talking of connectivity option, the device works on GSM and HSDPA network as stated below:

It currently runs on the previous BlackBerry 5.0 Operating System (and can be upgraded to v6.0 at any time). This smartphone comes with a 2 Megapixel rear-facing primary camera that features a camera resolution of 1600 × 1200 pixels along with ability to record awesome videos, and video playing capacity.

It comes with an internal memory storage capacity of 256 MB RAM and has 256 MB ROM. And the phone is compatible with microSD card slot, expandable to 32GB

Connectivity, this phone comes with various connectivity options such as Wi-Fi 802.11b/g/n, Class 10 GPRS (32 – 48 kbps), Class 10 EDGE (236.8 kbps), UMA (carrier dependent), Bluetooth v2.1 with A2DP connectivity, HSDPA and also have a microUSB v2.0 connector. In terms of alert types, this device has been facilitated with several alert types such as Polyphonic ringtones, Vibration, and MP3 ringtones along with a loudspeaker, dedicated music keys and a 3.5mm audio jack.