In many ways batteries power the modern world. Everything that the modern man deems essential, in terms of technology, is powered by a battery. We enjoy the luxury of being able to take our tablets and smartphones anywhere and still use them as if they were plugged in. However, there are certain frailties that accompany the battery. One is that they often lose their potency from the constant charging and overcharging. Batteries often overheat or sometimes leak, causing a numbers of problems.

But recently there is a stir in the field of batteries that would make it possible for batteries to be powered by blood or even sweat. First a brief look into how batteries work. 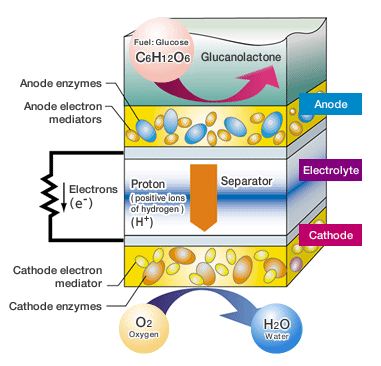 How do Batteries work?

Look at any battery and you’ll observe that it has two terminals, both a positive terminal and a negative terminal. On smaller batteries the terminals are located on either end of the battery, away from each other. However, on larger batteries you notice that the two terminals are located next to one another. If you were to merely connect a cable to the terminal, the electrons would move as quickly as they could from one end to the other, thus quickly wearing out the battery or causing dangerous reaction.

So how is this problem countered?

Obviously, you want the movement of electrons, that is your energy source, but what how do you keep the battery from imploding on itself? You need something called a load, anything can be a load- a light bulb, an iPod, a car, anything that takes the channeled energy of the battery. This is essentially how our products are run.

The battery needs a source to release its energy on and once it finds that source, such as a hairdryer, it conveys energy to the load, often through the use of power inverters.

Scientists recently claimed to have invented a battery that is able to run off electrolytes found in bodily fluid. The new ‘bio battery’ is paper thin, and is made up of nearly ninety percent cellulose. Cellulose is the same substance found in paper, and the battery has the same look and feel as paper. 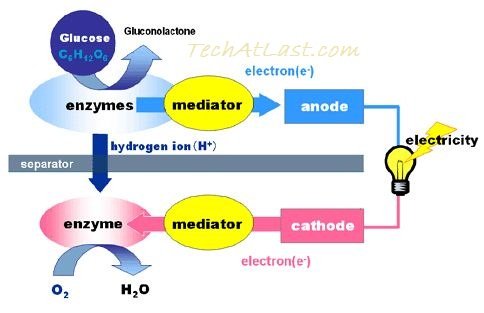 The battery is also lightly coated in a conductive substance called carbon nanotubes. Electrolyte rich fluids such as blood, sweat, or salt solutions, would be enough for the battery to sustain a significant charge. This makes the battery ideal for medical purposes, because as long as a subject is alive they are going to have those type of liquids in their body.

For example, the bio battery could be placed in a pacemaker, and never have to be taken out, since blood will always be around it. Also, since battery is paper thin it is able to bend and twist, allowing it to be placed in places traditional batteries can’t. This is an exciting prospect because hundreds of medical opportunities could open up with these new bio batteries. Up until this point batteries have made us mobile, but in the future they might actually keep us healthy.

As one of California’s graduates with a B.A. in Communications, Ben has the privileged of writing, not only as a vocation, but as an avocation.