They’re again back once again with an Alien Invasion. After a successful release of the Angry Birds game years back, Rovio has enjoyed the success they have made in the Mobile and PC industry with the craze for the popular game, Angry Birds. Rovio has just launched a New Game called Angry Birds Space. Rovio quote as saying:

“The chase is on! After a giant claw kidnaps their eggs, the Angry Birds chase it into a wormhole and find themselves floating in a strange new galaxy – surrounded by space pigs!”

Fortunately this time, these series of Angry Birds have their own super powers. Angry Birds Space new game initiates you into new adventures on the planets and in nought gravity, ensuing in spectacular game play which ranges from slow-motion puzzles to a light speed destruction.

The new Angry Birds Space game comes with brand birds, brand new superpowers, with an access to the galaxy for them to explore around and there is no limit to the sky for them anymore! The game featuring the new DANGER ZONE which is the most dangerous of all Angry Birds games levels since the existence of the game.

Can you go beyond the Danger Zone?

I guess you can’t but time will tell when you begin to play the game. The game has been launched few days back and its trial version is available for download from the Rovio Store with limited playing levels. In the game, you may need health, but on how to restore men’s health in life, read on the civsvi.com. However, you can get access to all the other levels by purchasing the full version of the game.

You’re gonna experience this game courtesy of Techatlast without paying a single penny for this game!

I have nice tricks to share with you below which will show you how to play the game without paying money to play it. Check it out here below.

Check out the New Birds below

This Angry Birds Space v1.0.0 application is Cracked and Patched by THETA

Notes on How to Install Angry Birds Space Full Version

1. Download the Angry Birds Space file  from the link above and extract the files inside into a folder on your computer desktop. Then click the installer and run it in order to install the game on your computer. While installing the game, when you reached the place where it says “Launch Angry Birds Space,” kindly “UNTICK” that option. Don’t ever launch the game immediately the installation has finished.

2. Now open the Angry Birds folder that you downloaded from the link above, open the “Patch” Folder from that Angry Birds folder. Double-click on the patch icon to start the application. When it has opened, then browse through the patch application to the folder where you angry birds space was installed to, it should be around here on your computer i.e: (C:Program FilesRovioAngry Birds SpaceAngryBirdsSpace.exe). Then select the location and click on patch. And you will receive message that it has “Successfully Patched.” 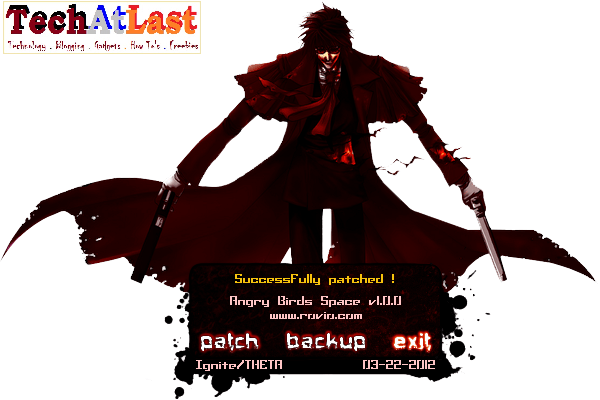 3. So, now launch the game so that you can start enjoying your 100% free Angry Birds Space game. To start the game, look at the bottom side of the screen and select “Activate Full Game“.

4. To get the KEY, go back to the patch folder once again and then open the ReadMe.txt file. You will then see the serial key to activate the game after the patch.

5. Copy that serial key and then paste it in the Angry Birds activation window.

Do you find this information helpful? Please share your comments below.