Android users love to use the internet to surf and download apps, but these activities in turn invite viruses and malwares in Android gadgets. Since Android has an open-source nature, the probability of getting it affected by viruses and malwares. The problem of viruses has become the run-of-the-mill in all Android devices, since a comprehensive range of applications are coming from developers around the world.

Then the problem of getting under the Google radar to get approved in the Google Play store. There are also several resources where you can download paid apps for free, which sometimes are stuffed with malicious codes intends to steal your personal information. The virus affects the speed of the device and makes it laborious to use.

Nevertheless the solution to the problem of viruses in Android devices is the use of an appropriate antivirus app.

There are many antivirus apps available to use on Android like AVG Antivirus, Lookout Security, Avast! Mobile Security, Dr. Web Anti-virus Light, Zoner Antivirus etc. Let’s mention them one by one. 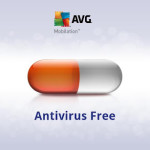 AVG Antivirus is a well known antivirus for PC and is the best tool to maximize the performance of your android handset as well.

AVG antivirus is a complete antivirus suite that keeps away not only thwarting viruses but also boosts the efficiency of your android. It scans the installed apps, as well as the new apps and thus provides a real time protection to your Android smartphone or tablet.

The basic version is free available for free, while paid version cost you money. When installed AVG automatically scans your installed apps to see if you have malware in your device, then it switches to real time protection mode so that any new apps are scanned straight after installation and your device becomes clean. 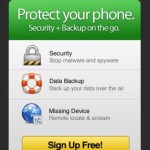 Lookout Security & Antivirus protects phones without too much draining of battery life. It is a very important app for Android. Lookout offers real time protection which scans all newly installed apps and also makes an initial scan post-installation, to make sure that there are no nasty apps installed.

Apart from Antivirus protection, Lookout also offers a free “Find My Phone” service which helps in searching a lost or stolen phone on a Google map (if the device has GPS).

It can remotely instruct the device to sound a loud alarm, even if your phone or tablet is on silent. By using the mylookout.com website you can locate your phone from any web browser. Lookout can detect 79.6% of the malware thrown at it. 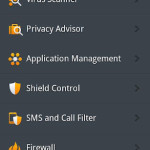 Avast ! offers a commodious range of security tools including antivirus, a privacy advisor, a web shield –that scans each URL and warns you if it’s a known malware-infected URL– an app manager, and  provides a plenty of anti-theft alternatives, which include the proficiency to control your phone via SMS and execute actions like a history wipe, phone lock, and siren activation.

Avast! will automatically scan the existing apps for any malware and then switch to real-time protection mode. It is the best antivirus software available today for Android and is completely free. All the functions like privacy advisor and web shield are included in the free version.

It also safeguards your personal data with infected URL alerts and also provide an automatic virus scan. It also stops hackers with firewall (but this only works on rooted Android phone). 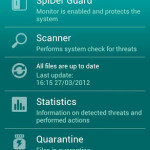 Dr. Web Anti-virus Light is a well-known anti-virus from Russian vendor Doctor Web. It safeguards your costly android phones from malwares and viruses. It also provides protection against spam. This app does not affect Operating System efficiency and takes care that the battery life is not reduced.

When you initially install Dr. Web, it will not perform an automatic scan of previously installed apps; also it won’t automatically switch on real time protection. Nevertheless, once you manually update the virus database and enable the Spider Guard, it behaves much like AVG and Lookout. 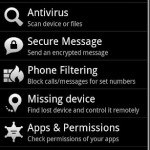 Zoner Antivirus for Android automatically scans your device for viruses when it first runs and then moves into a real time protection mode. It is also a security set that contains theft protection allowing you to remotely control and locate your devices through SMS messages. It can alert you and notify you if the device has been stolen and the SIM switched. It also provides options to scan data files on your SD card and a procedure to filter calls and messages from a user-created blacklist. You can send encrypted messages to your friends (if they have Zoner AntiVirus) installed, this is done by encrypting and decrypting of message using the same password.

What’s your opinion about these android antivirus apps? Do you have a special app installed on your android phone with good security capabilities which you would like to share with us here? Please drop all of them in the comment section below.