Mobile advertising is certainly becoming a huge market in the online world, even more so than what we’ll call ‘traditional’ online advertising.

There are many factors which add up to mobile advertising now becoming the main choice over ‘traditional’ online ads, some of which I’ll get to below.

Before the introduction of the iPhone and Android handsets, mobile advertising didn’t really enter the minds of advertisers, even though the mobile advertising business had been round for almost half a decade, it wasn’t until the smartphone was heavily adopted by millions that mobile advertising became a sure fire way to target people more effectively than your ‘traditional’ online ads.

It’s a pretty well-known thing that we’ve now created a blind spot for adverts; this website shows a great example of what’s known as an ‘advertising heat map’. The darker colours indicate where the person is most likely going to be looking on your page or website, and advises you to place your ads near or around the darker areas in order to increase CTR (Click Through Rate). 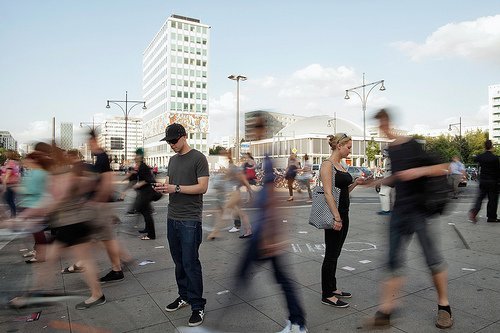 As useful as it may be we’ve all become used to the typical banner ad and we’ve all learned to look past it. This is something mobile advertising has tackled.

ALSO READ: Great Tips on How to Design Banners to Increase CTR

Mobile advertising and mobile marketing has come a long way since its birth in the early 2000’s; the rise in social networking probably deserves most of the thanks for that. Websites like Twitter and Facebook are littered with adverts that appear to be legitimate ‘tweets’ or ‘timeline posts’. These native style adverts both help increase ad engagement as well as being less obtrusive than a large banner or video ad. These native ads that also appear on websites like Facebook, Twitter, and Tumblr all have the ability to be shared with a user’s friends because Twitter ads can be “retweeted” Facebook ads can be “shared” onto user’s own timeline, and Tumblr ads can be “reblogged” onto user’s own blogs. The act of sharing alone has helped mobile advertising boom. The reason I mention the three social networks is because at least half of each websites users access the sites via mobile apps.

Mobile advertisement types also have the advantage over traditional online advertising media, partly down to the interactivity which smartphones and tablets allow.

Rich interactive advertisement types are more likely to entice a potential user than a plain banner. This can be done either with a video which allows the user to choose a direction for the video to go, or whether it’s the chance to browse a line of products directly from the advert itself.

Video ads also play a key part in mobile advertising, both within the browser or within an app or game, video ads are another type of mobile media that can be shared, something I touched on before, which can result in the video being seen by many different people, and even shared again and again which may result in the video becoming viral.

‘Viral videos’ are something which many advertisers take a big part in; a great example is the T-Mobile Dance advert which at the time of writing has almost 39-million views, though it’s not strictly a form of mobile advertising, mobile devices probably played a big part in sharing the advert onto various social networks.

Technology researcher Gartner say that worldwide mobile marketing revenue will reach around $13-billion in 2013 which compared to the $1.6-billion made in 2010 shows just how quickly mobile advertising spend has increased in just three years.

Online advertising spend in 2012 was valued at around $33-billion with that number increasing exponentially year after year; but as I mentioned above mobile advertising revenue is increasing rapidly and is certainly hot on the tail of traditional online ad spends.

Great research, but what I especially like about mobile ads is that you can use cost-per-call instead of traditional cost-per-click model and get highly targeted phone calls quickly

In today era mobile advertising became a popular technique of online marketing. Most of the people uses this marketing technique for there online business promotion.

Well, there is a potential for this type of advertising. I think that ad on responsive website is
the best solution, because you can cover many devices at once.

Mobile advertising is the way to go, especially for app developers or those who has one or two things to do with mobile users. It is the future of advertising.

Mobile advertising is the way to go, especially for app developers or those who has one or two things to do with mobile users. It is the future of advertising.