Kindle Fire is known for its amazing reading ability – it helps people reads and surf the web with ease without any disturbance. If you happen to be a owner of the Amazon Kindle Fire, that means you’re very lucky because the Kindle Fire can now run on a custom ROM of a decent version of Google Android OS. XDA developers have designed a custom ROM based on a pre-alpha version of the Ice Cream Sandwich, or the Android 4.0 – this is the latest version of the Android OS presently available.

In history, this will be the first time that Amazon Kindle Fire work on an actual tablet operating system instead of some version of the Gingerbread which is meant for the smartphones. Even some group of people believes that this ICE CREAM SANDWICH is the greatest version of all the Android till now. For this early build, the Ice Cream Sandwich port is working perfectly well for now. This mode is based on CyanogenMod 9. 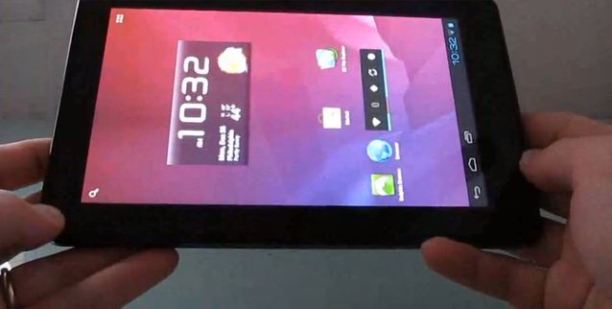 And since it is an early build, even though, I said that it is working perfectly well – that doesn’t mean that it does not have few glitches as well – the audio and the and video that is on  the device aren’t working properly consistently. Though, I believe it is going to be fixed soon.

Another glitch that we’ve noticed about the device issues is the SD card bug.

Though, the tablet doesn’t have any SD card that comes with it – the third-party browsers and the OS file browsers on the phone shows the SD card option on it even without its presence. But what will amaze you is that whenever you wanted to download an app from your browser to the tablet – it will keep on showing the “No SD Card” error and this is a big bug on the tablet and the guy inside the video below says that the developer who developed the port is searching for help from other hackers and developer to make the solution possible.

They are working hard every time to make sure that they turn the $199 worth tablet into the number one of all the tablets running the latest version of the Android.

Be expecting our updates any moment from now about that.

The Kindle Fire looks pretty cool. I really think it will make a big splash in the market after this hack. Now if they could just fix the bug, people will jump on this.

Is not this tablet use uses Android OS version 2.3. Amazon Kindle Fire with the combination of the new cloud-accelerated split browser, is expected to have an advantage in terms of speed and performance.

I am all for hacking the Kindle Fire and putting ICS on it if you want more functionality, however the Kindle Fire itself is a dumbed down Android OS version for a reason. It is ridiculously simplistic and easy to use for kids and seniors and the non-techies, far easier for them to grasp the carousel, shelf interface and navigate. My 60 year old Mother in Law figured out how to use her Kindle Fire in 6 hours and my kids in less than 2 (they are 8 and 5).

Wow, that is great @Justin. Thanks for your comment

Exactly, the Kindle Fire was designed to be easy to use. I have both an iPad 2 and a Kindle Fire, and my 6 year old kid prefers using the Kindle Fire. This is just another reason why the Kindle Fire shouldn’t be ranked after the all-amazing iPad 2, it’s just a great device in every way as well. Schools that consider using tablets but think iPads are too expensive should really take a look at the Kindle Fire.