Apple is busy making one, as New York Times believes. There is one being churned out in the Samsung workshop too, as confided to Bloomberg by a Samsung official.

So, it is only natural that Google would join in the fray. To come out with a smartwatch that is.

A smartwatch war is being fought out between the tech giants and the race to be the first has intensified with the news that has leaked out from the Google quarters. 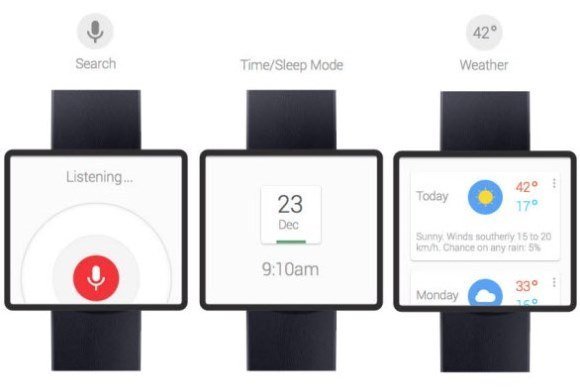 Google Grabs the Headlines with Its Smartwatch-in-the-Making

The news about Google’s smartwatch efforts were first splashed in The Financial Times. The news daily had apparently got the wind from a “person briefed on the project.” According to the newspaper, Google is developing a smartwatch that will act as an extension of an Android phone. Although a Google spokesperson declined to comment on the news item and lambasted it as “rumor,” industry pundits believe otherwise.

Google had filed a patent in 2011 for a smartwatch with dual display, one of the two being a flip-up screen, and a tactile user interface that is, a touchscreen. The patent also described a watch that can include a wristband and a camera. The patent was approved late in 2012 and it is only natural that Google would start work on the product.

After all, the web giant has shown a considerable interest in penetrating the wearable tech market and has been working on Project Glass for quite some time now. Industry analysts believe that this smartwatch will work with an Android phone to let the user, rather the wearer, check their messages and other notifications quickly without needing to fish out a phone from the depths of their pockets.

There is another piece of news about Google’s smartwatch has had industry watchers sit up. According to The Financial Times, the gear is being developed by Google’s Android team and not the X Lab. Google’s X Lab typically initiates technologies for the future. Hearing the Android team is working on the project is a positive indication that Google too has felt the smartwatch war heat up and is intent on bypassing the multi-phase exploration way and get out their timepiece sooner than its smart glasses.

There is undoubtedly a flurry of activity in the Google workshops and it will be interesting to note what motivated the company to plunge into the smartwatch arena. After all, the Apple iWatch rumor has surfaced only this year while Samsung has confirmed its intentions only recently.

So, what made Google file their smartwatch patent way back in 2011?

With computers shrinking from room-sized units to those that fit atop a desk and then to ones that can be balanced on the lap and held in the palm, a wearable computing device was an inevitable development. Wearable computing devices like sports and activity trackers have already flooded the market and the widespread popularity of devices like pedometers and heart rate monitors has proven that there exists demand for these tech objects. Thus it is only natural that Google would not only want to explore, but also capture a piece of this burgeoning market.

Google may also have been encouraged by the success of the first generation of smartwatches like Pebble Watch and I’m Watch that are being offered by various boutique companies. The very fact that crowd-sourcing has funded the Pebble Watch project, 150,000 units have already been shipped, and 85,000 more have been ordered is a clear indication of the mass appeal of smartwatches. In fact, ABI Research, a market research firm has predicted that by 2015, 485 million wearable computing devices, including smartwatches, will be shipped every year.

It is evident that Google has not missed the writing on the wall!

There is no smoke without a fire. Close on the heels of the Google smartwatch “rumor,” came a news report by the Korea Times. According to the newspaper, LG Electronics, too, is making its own version of a watch that may work with an Android operating system. So, it is evident that Google’s entry into the field has fired up competitors.

In the end, the company that makes the biggest initial impact will likely grab a bigger share of the market.

Regardless of who is credited with being first, it is clear that tech heavyweights like Google have kickstarted an interest in wearable computing devices and it may not be long before others jump on to the bandwagon.

So, what do you think about Google entrant into the smartwatch industry? Do you think Google Smartwatch would be the next thing people are looking for at this time? Please share your views with us.

13 replies on “A Google Smartwatch Reportedly in the Works”

Thats what im talking about, a stop wathc from Google, maybe they will add some little devise in their which will find out our personal information so they can spam us with personalized adverts!!! know what i mean!!! LOL

I’m surprised they haven’t done this earlier. I don’t know if these are really necessary, but with that being said, I’ll probably eventually one when they come in white.

I really loved the concept of Google Glass. If they are onto something like a Smartwatch, I’m excited for it.

Exactly, you should be ready for the era of smartwatches! 2017 is going to be the year of so many inventions in the category.

I can understand the google goggles project (google glass). I mean it’s a dive into unknown waters. But I don’t understand the need for a high tech watch other than to earn a lot of cash. Scientifically, the technology for a google watch already exists. All that is left to do it to build it and sell it. That technique is apple’s thing. I would expect google to go for a higher form of scientific creativity.

The plus point is that the focus of the project seems to be in the right place – expanding the android technology. If successful, it will result in technology becoming more mobile than ever before!

Good point knockout, all these called technologies, Smartwatch, Google glass are there just to make some dollars, not really something unique.

Thanks for your contribution jack.

Smartwatch is too much I mean Google we have the smartphone as out best companion and when you are carrying a quad core 5 inch computer in your pocket then why don’t you need a smart watch that has same functionalities of your phone perhaps in some downgraded way.

What about the Google Glass. Google is getting crazy lol!

You would have thought they would have worked on this prior to google glass. But in any case, I want them both! …yup touchscreen watch, I could get use to that. Unless like the comment above mine said, Google really just wants to track us and obtain even more of our personal info!! ahhh

We can look at that angle too, maybe Google is using every means to know what we love to eat, what we care about in order to produce relevant and irrelevant search results whenever we conduct keyword research. Who knows?

Sounds a bit gimmicky to me, but then that’s what I thought about i-Pads when they first came out and I’m now on my second one 🙂

I’m hoping that we’ll get to see this Google Smartwatch in reality by the end of 2013.

A lot of rumor has been circulating about it, just like the Google glass. I eagerly await the concept.