Bebuzee have finally upped their game in contending with the world’s finest! It certainly seems as if we are about to see great things this year in 2015. To begin with, the website is now looking very sleek and modernised.  The new features are incredible, boasting the all new blogging service. Users are now able to use gif format image upon uploading images to go along with their blogs.

Talking about gif format images, users are now able to upload these directly on to their walls in order to be displayed amongst the news feeds for fellow network members to see. This has been extremely popular with Bebuzee users with the website now trending full of gif images at various capacities. Taking things, one step further, users are seen to have been taking full advantage of the whole gif concept with many now replacing their static cover photos on their profiles with a more animated approach. With the most recent update, users are now able to create their very own slideshow on the cover photo section of their profile. Other users are also able to go on their fellow friends’ profile pages to look at these when accessing their profiles. Those who have actually sat down and played around with this feature, have taken this up a notch. By doing so, with the permitted six image limit on the cover photo the public have gone wild. Way before I discovered what you could do, I discovered that these cheeky users were actually either making their own gifs by cutting small videos or finding continuous gifs to then set it as their cover photo. What this means is that if somebody then went onto their profile, the cover photo would simply look like one long video, rather than different frames of images.

Consequently, this has created a crazy trend with users all over the world now competing to show off their incredibly moving (see what I did there) profiles. Sooner or later I reckon the word gif will be amongst the trending topics on the column, situated to the right of the news feed. 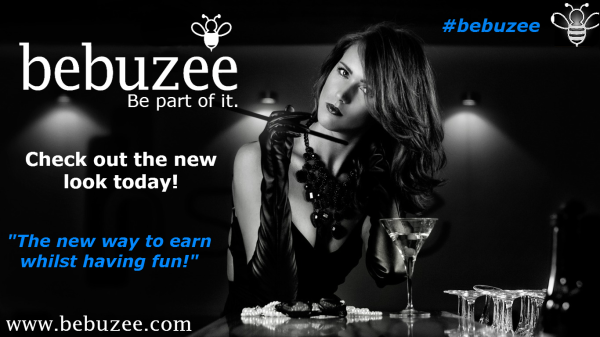 Going back to basics, as many of you may already be aware, Bebuzee are based in Bournemouth,which is a beautiful seaside coastal town in the South of England. Bebuzee are believed to be one of the world’s fastest growing social networking sites within recent times reading in excess of over ten million users on a global scale, surpassing some of the most successful and well established names in social media and technology.

As crazy and wacky as it may sound, Bebuzee has a great concept that social networks must share their profits with all their users. This is due to the fact that the social networks itself only generates any sort of revenue in the first place, because of the support of those who use Bebuzee.  All content that is uploaded or shared by users is what results in online traffic which adds up to be converted or transferred into money. Similarly to how adverts without viewers are simply pointless until users either click or view the contents. Without the help of our fellow users, there would not be any revenue for the Social Network or any of its services. Since it is what drives the entire platform forward, Bebuzee have decided to share their profits with all their users as mentioned previously. By doing this, it automatically puts Bebuzee a step ahead of the game.

The way it all works is actually quite simple. All users can begin earning through advertising impressions and clicks. Each time another user clicks on a piece of advertising displayed on whatever page, the advertising user will receive a sum of twenty-five cents ($0.25USD). As advertising seems to be displayed on Bebuzee’s platform, it can turn out to be very advantageous for those who wish to make a few bucks. On the other hand, impressions is a measure that records the number of times content uploaded by advertisers is displayed or seen by the end-user. It does not matter how many clicks are made, but simply the number of times it appears. For example, every time a photo, video or just a status is seen by another person via the platform, it is counted as one impression. For everyone thousand impressions achieved by a user Bebuzee will pay out $0.50 to that person.

To keep track of things, Bebuzee have a superb dashboard under the ‘My Earnings’ button on every individual’s profile. All new users are still said to be welcomed to the social network with a complimentary dollar ($1USD) upon initial sign up.

Bebuzee have already brought out many features allowing users to generate more impressions for users to earn via. Some of which are the original, image rating feature Rate-My-Pic and blogging service Blogbuz.

For those who are not completely aware of the ‘Blogbuz’ feature, it is not only dedicated to keen bloggers but for those who wish to post stories, experiences or current affairs. This has been quite a popular platform, especially since it was originally launched allowing all users to post up to five pictures per blog (including gifs), a single video and text space to publish whatever they wish, within reason of course. The site is said to be very highly moderated and so any explicit content will be removed with responsible individual treated appropriately. Blogbuz also displays your slideshow from the profile page, as mentioned previously, to brighten up your blog page.

Moving on to the rapid growth of Bebuzee, we must mention the release of further products and services, taking Bebuzee’s product tally to an almighty seven. These are the Social Network; Bebuzee Adbuz – Advertising Network; Shopping-By-Images – Self Explanatory; Properbuz – The Global Property Search Engine; Bebuzee Points – The Worldwide Business Search; Question-&-Answer and News Site both of which are self-explanatory. Most of these incredible platforms and features, could help push Bebuzee towards becoming an everyday household name. From now onwards, we can only watch Bebuzee gradually grow to becoming one of the largest empires in the world of technology.

One reply on “New Look, New Buz – Bebuzee – The Start of the Empire!”

hi thanks for the post really good ones thanks for sharing details about Bebuzee – I like the new design though. Thanks!